Should I Go to College if I Want to Be an Entrepreneur?

This was originally posted on Quora in response to a question by the same title.

Most people are going to tell you yes, it will be beneficial to do so even if you want to be an entrepreneur.

I think this is wrong.

But let’s flip that on its head and actually compare college against a realistic alternative. Way too often does this debate get turned into, “if you don’t go to college, you’re going to be sitting on your couch eating doritos for four years and won’t amount to anything.” If you are a reasonably driven, hard-working young person, you can easily overcome this myth and get much more out of these 4 years than sitting a classroom can afford.

Another word of caution — the entrepreneurial and human capital landscape has changed so much in the past 5-10 years alone that what held true in 1975 probably doesn’t hold true in 2015.

What are the arguments for going to college if you want to be an entrepreneur?

Assuming you are committed to working hard and actually developing a sense of work ethic, all of these can be had just as well and at a much lower cost than college provides them outside of the college environment.

The device you are reading this on has access to more human knowledge than the entire libraries of Alexandria and Harvard Library in 1960 combined. The idea that you can’t become educated outside of school is ludicrous. There are plenty of resources that allow you to be guided, mentored, and taught by leading experts without having to enroll at a university. The, “well you shouldn’t neglect your education, so yes, you should go to college,” argument is so trite and repeated that I don’t even want to beat a dead horse with this one.

A friend of mine wrote this nice post about being an intellectual outside of school. — The Unschooled Intellectual | Praxis

James Altucher notes that he has never used his connections from college in a professional context. Many of the entrepreneurs I meet are the same way. College provides you with a certain kind of network that looks like it might be valuable, someday while you are there, but often rarely is. This is what I call a horizontal network. Horizontal networks are those that are made up of people who are around the same age and career-stage as you. They might have different interests (it’s honestly unlikely that you’ll interact with many people outside of your major and primary interests), but they are all pretty much in the same phase of their professional lives. Hypothetically, that kid you took Finance 101 with could be a hedge fund manager someday, but that still would require you to maintain the relationship after college for another 10-15 years. A lot of people find that their college relationships and friendships dissolve after a few years out, much like high school. 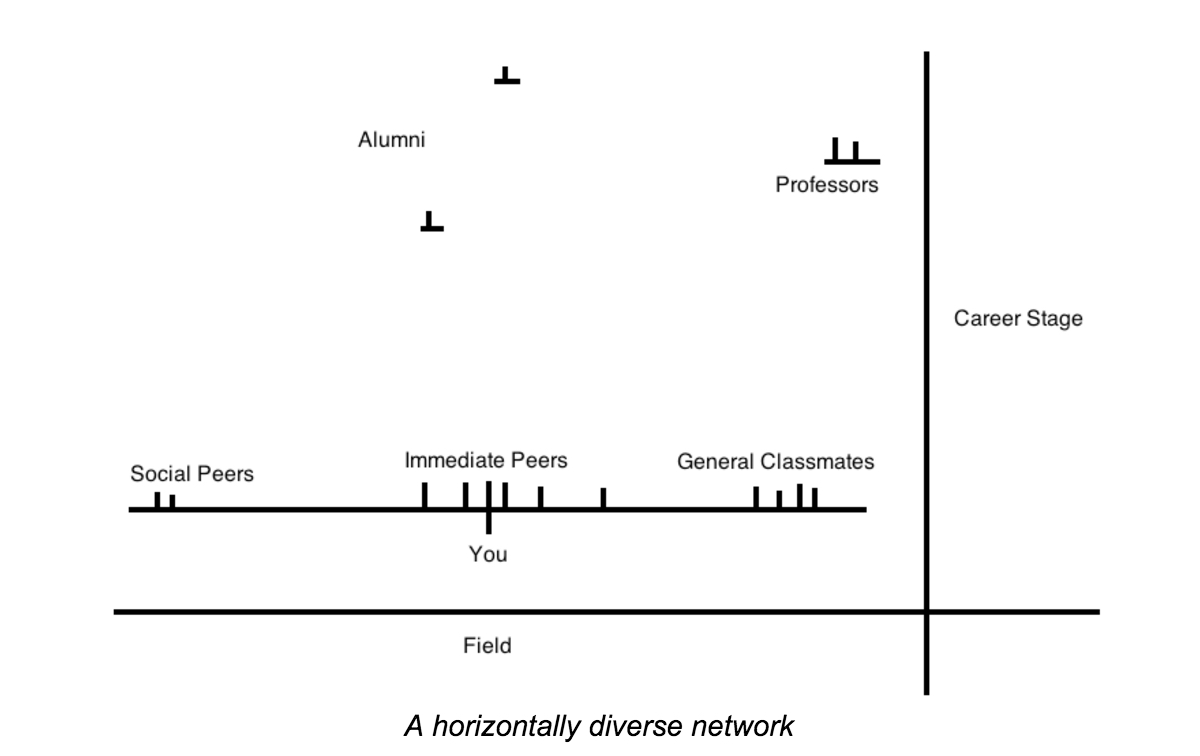 Instead, what you need in order to be successful, especially as an entrepreneur, is a vertical network. This is a network of people who are at different stages and places in their careers and their lives. They can act as advisors, mentors, and as just generally interesting and helpful people to know. 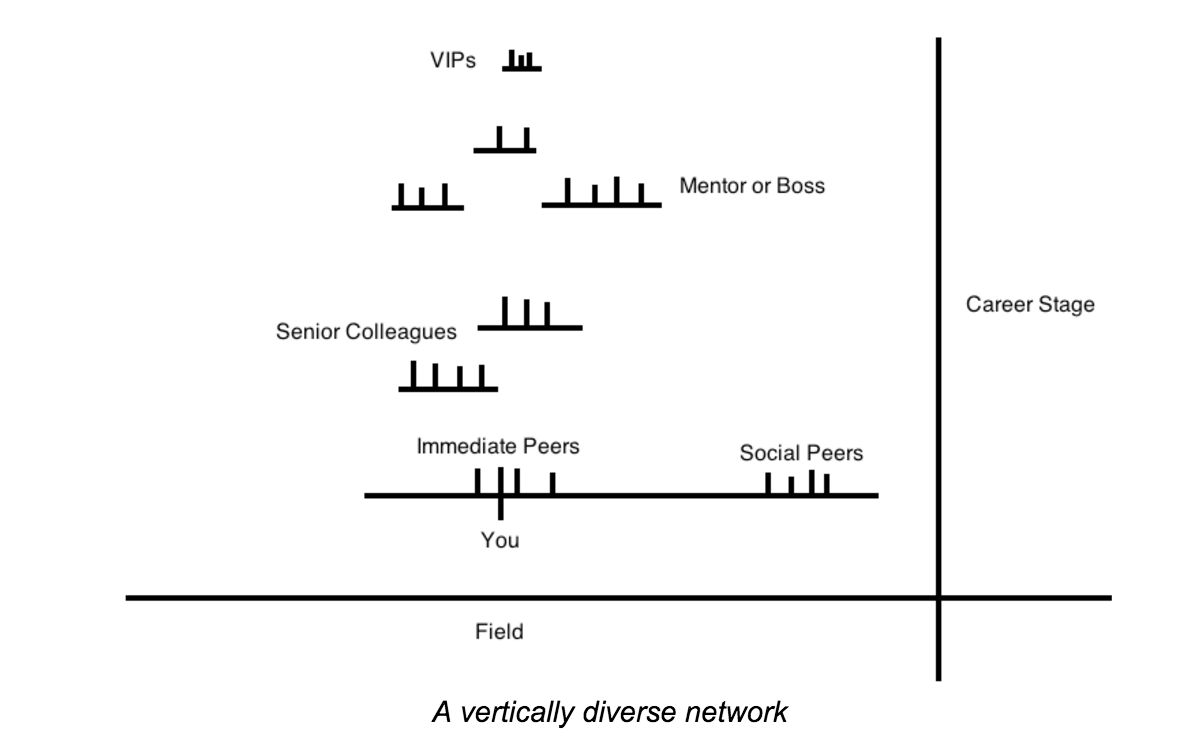 While you can meet some people who are much further beyond in their careers through things like alumni networks at college, the best way to get to know these people is in the real world. Work for them, work with them, ask them out to coffee, create value, impress them, be sincerely interested in them. Since leaving school, most of my network is made up of these kinds of people.

If you don’t go to college, there will be people out there who think that you didn’t have it in you to plow through four years of monotony, intentional confusion (especially if you study postmodernism in any capacity), and following tiny little instructions. As much as I would love to say, “forget about ’em,” if you can prove your work ethic and focus elsewhere, then I think that’s a worthwhile pursuit.

When most older people (especially Baby Boomers) see somebody who hasn’t gone to college, they assume that this person doesn’t have work ethic, won’t listen to advice, and is generally unreliable.

The thing is, at this point, all you pretty much need to get through most colleges in most majors is the attention span of a bird and a faint pulse — if you have some better use for your focus and your short time on this earth, use it!

My advice is to go work with an entrepreneur, learn what it is like to run a real, profitable business, learn from their failures and successes, and find a trusted advisor or mentor. Do this for a long enough period of time so that you can show off that, “yes, I can actually focus, thank you,” when you find those detractors, and create a track-record of value.

Work ethic is better built outside of college because you have more skin in the game. With all the subsidies, loans, and funny-money floating around college students nowadays, many don’t have a real incentive to develop a real work ethic. After all, if they don’t do well, who bears the price? If you have to perform well or lose your job, or your advisor, or a project, you can be amazed at the level of work ethic you’ll develop.

If we’re honest with ourselves, we’ll admit that most people go to college to get their foot in the door for a job. Rarely is the degree of any importance or use after this initial application and interview.

This is increasingly not the case for ambitious, high-achieving young people, though.

The Internet has lowered the cost of finding out information about a candidate so extravagantly that a degree is pretty much superfluous from an HR perspective.

I’ll use an example:

This morning, I had a phone call with a young man who reached out to me on LinkedIn and wanted to talk about the value of the college degree. I looked at his LinkedIn profile and learned more about his ability to execute on projects, write well, think critically and analytically, and go find opportunities for himself than I could have from seeing that he would have a BA from Notre Dame.

HR departments aren’t stupid — they know this. So, even if you want to be an entrepreneur who works for somebody else first, I wouldn’t fret over the need for the degree so long as you can create a brand for yourself. Start here: Start Building Your Digital Brand, Now | Praxis

In short, no, I don’t think you need to, especially if you are driven, creative, and competent. We launched Praxis for people like that who are wasting away in universities and colleges when they want to be out there learning how to create value. These are people who are competent, want to work hard, and don’t want to give up on education. You don’t need to waste away in college — you’re worth more than that.