How Not To Send a Cold Email: ICO Edition

I tend not to pick on people sending me cold emails. I get enough of them and I make myself pretty open to receiving email that if I picked on every person who sent me a shitty email, I’d have blog content that would outlast conflicts in the Middle East.

Yet spam around Initial Coin Offerings (ICOs) gets to me.

I don’t know exactly why. It might be because I was initially excited about ICOs when they first came on the scene. Here was a way for early stage companies to raise money without having to get into the Sarbanes-Oxley fueled nightmare that is late-stage venture capital funding (see my friend Michael Gibson’s tweet here). Here was a market force that could really democratize private investing and sidestep accredited investors.

Instead, most amounted to little more than vaporware. 59% of 2017’s ICOs failed. Not just, “we ran out of money but we tested the market” failed. Instead, “we’re abandoning the project altogether and we don’t have anything to show for it and, no, you don’t get your money back.”

Even worse, pump and dump schemes run amok in the ICO world. There are actual subscription groups that coordinate the mass buying of tokens before a major announcement. Then, after the dupes buy in, they coordinate a mass-sell, crashing the price.

(Yes, this is illegal with stocks.)

I was once excited about these projects.

Now, I would rather get spam from a Nigerian prince telling me that a distant relative of mine that he knew bequeathed a large sum of (non-cryptocurrency) money to me than get cold emails from yet another ICO “blockchain entrepreneur” with no clear value-add for me.

Over the last year, I received so many (poorly written) cold emails from ICO “entrepreneurs” looking for “investors” that, now, emails with “investor” in the body tend to get caught by my spam filter. That’s a huge annoyance considering the work I do. 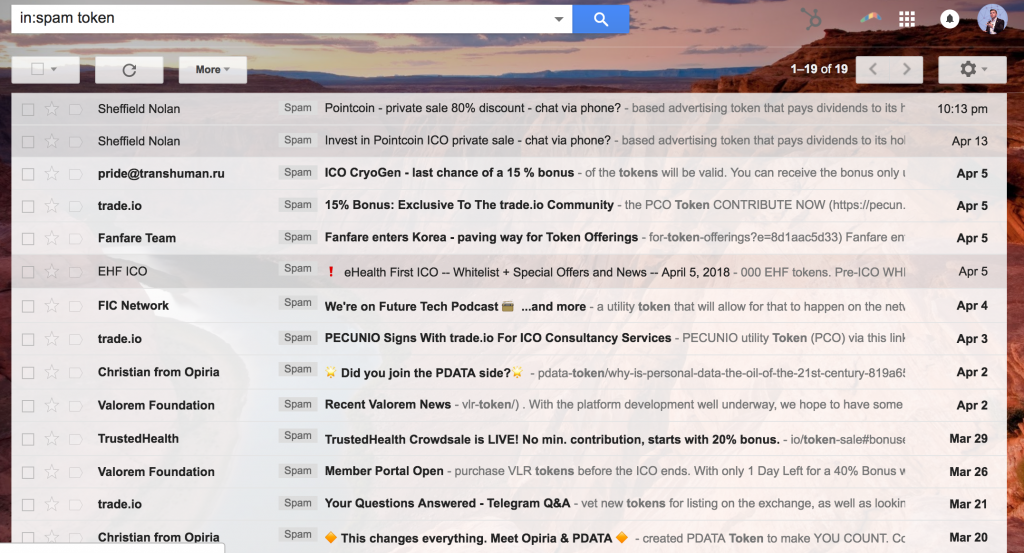 The “Invest In My ICO” Email

This spam bothers me not just because the ICO market over the last year gives a bad name to a technology with a lot of potential. It bothers me because the emails are so poorly written. So poorly written that I sometimes wonder, “whoever actually bites on this deserves to lose their money they put in.”

One rolled into my inbox earlier tonight (the impetus for this post).

At first glance, this is a half-decent email. He tells me who he is (founder of this crypto company), what he’s doing (raising $2 million at an 80% discount), and what he wants (to send me more info or jump on a call). It’s so half-decent that it would trick the sender into thinking it’s a good email. My rule for half-decent? Round down.

The questions that immediately raced through my mind were:

Before sitting down to write this piece, I wanted to confirm I didn’t know this guy and give him my info. A quick Twitter and LinkedIn search shows me that nope, I don’t know him. He’s just spamming people.

The “blockchain entrepreneur” in this email has two stages he has to set up for his email:

He doesn’t really succeed at either. He doesn’t give enough context to figure out who he is, how he got my info, why he’s emailing me, and why I should listen to him. Then his pitch for his ICO is so sparse that I have no idea what it does. “A rewards-based advertising token that pays dividends to its holders”?

How would we do this email correctly?

First, we wouldn’t be scraping people’s emails from the Internet. I have no idea how this guy got my email address. If it was sold onto some ICO email list, then he should be wary of those lists, because they include people like me. Mutual connections, second-level connections, or introductions are always best. If you know somebody I know and trust, I’m more likely to give you some of my time. You have social proof.

But, if you’re just sending cold emails, then there’s a better way to approach an email like this one.

Remember the questions that immediately went through my mind above:

With that in mind, a simple email starts like this:

My name is [Name]. You don’t know me, but I found your email online after reading your article about sending cold emails to get clients. I saw you do some work with early stage technology companies and their investors. I wanted to reach out about an investment opportunity that should align with your interests.

I am [relevant experience and role]. We are building [elevator pitch, avoiding jargon].

We’re raising $2mm in a token sale. Pre-sale purchasers will receive an 80% discount when we do a public sale. I wanted to see if you’d be interested in that pre-sale.

Would you like me to send you our executive summary or deck?

This is a quick, non-intimidating, informative, and low-pressure email. It’s honest that he doesn’t know me (so it disarms my “sleazy salesman” alarms that go off when I get a cold email), knows something about me (further disarming those alarms, showing he did some perfunctory research), and gives me an idea of what he’s working on.

With something like this – asking for an investment in a clearly risky space – it’s best to confirm interest before plowing headfirst into a phone call. If I am interested and busy and he asks me for a phone call, I may never reply because I’ll have to sit down to write, “actually, would rather look at your deck first before hopping on the phone.” If I am not interested, I can ignore the email or simply reply, “no thanks.”

If you’re going to do an ICO, please, for the love of God, do not engage in email scraping.