Case Study: How to Pitch Journalists & Get Featured in a Major Magazine

Learning how to pitch journalists is one of the highest-return skills you can pick up if you’re launching a product, a book, or a new initiative. It’s also pretty opaque if you’ve never worked with anybody in PR or earned media.

For years, I felt like approaching journalists was a dark art. I usually just let them come to me. That worked fine. I got in the Christian Science Monitor, on Fox News, Fox Business, The Blaze, CRTV, and other outlets. But it wasn’t until I started working closely with people in PR that I learned how to craft a message to pitch journalists and get replies.

Haley Hoffman Smith recently approached me for coaching on pitching journalists. She recently released Her Big Idea, a book covering topics related to women in entrepreneurship, and wanted to get some earned media for the launch. 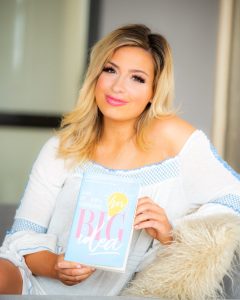 Haley’s original message that she was using to pitch journalists wasn’t bad by any means. It made clear that she wrote a book and that she wants them to cover it in some way. Still, it wasn’t generating the replies she wanted.

With a few tweaks, though, we were able to get her covered in The Washington Examiner and Entrepreneur Magazine within just a few weeks of the book’s launch.

Just a really well-crafted email around an interesting story.

With her permission, here’s how we crafted that email.

Haley’s original pitch focused on why writing the book was important to her. This passion is good to see but for a busy journalist, they want to know more about why it is relevant to them. They get pitched often and most of the pitches are out of touch with what they, as journalists, should write about. 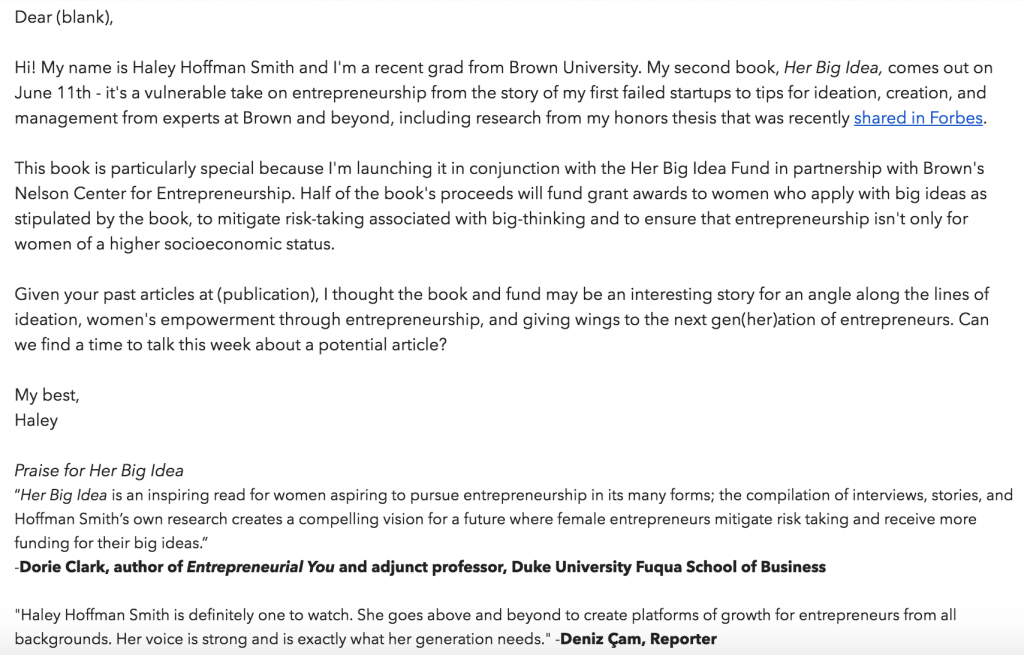 When reading through this, these were my initial reactions:

What Can Be Improved:

When emailing busy people that you want something from, use an incentive reframe. This is asking yourself, “what do I have that I can offer them? How can I offer it to them? What are other people not offering?”

In Haley’s case, it’s a unique perspective on women in entrepreneurship, backed by research, with a new book coming out.

This is the reply I gave her (quoted here because it is too long to screenshot).

I’m going to wear two hats here quickly. The first is a strategic hat and the second is a tactical (email teardown) hat.

Strategic Hat: How Should You Approach Media?

First, like any good cold email, you should treat this as the opportunity to begin building the relationship. An established journalistic relationship can drive value for you for years, so you don’t want to treat it like you would an email blast for a signup list.

Your goal of the first email is to pique their interest in the specific story you want them to write and to get them to agree to an embargo date (more on what this is here).

Important note here is pique their interest, not give them all the info.

That means you should not send the press release along at the beginning unless you just want this info out there. If you want a cool announcement story that generates buzz that you can roll into smaller stories, then ask for the embargo.

Once they agree to the embargo, then give them details. Don’t make it easy for them to write the story until they agree.

Tactical Hat: How Should You Write a Cold Email That Gets Read?

When somebody gets a cold email, they psychologically run through the following flow: “Who are you? Do I know you? Why are you reaching out to me? What do you want/what can you do for me? Optional: Prove it (this is more important in sales emails but will play into your email here, too). What specific action is my next step?

If you can’t answer these questions, you run a high risk of them ignoring your email or just thinking it’s a blast you’re sending to a lot of folks.

You answer the first question quickly but you don’t acknowledge how you came across this person until your third paragraph. You’re counting on them to keep reading until then in hopes they’ll find out how you found them. I would recommend saying off the bat how you got their info and why you’re reaching out to them in particular.

The what do you want from me? question isn’t clear to me, either. If I am reading your email while running through the airport, I would think you want me to write about your book. In reality, you want me to write about your program launch, yes? Your book is a rapport and seriousness point, not the main point of the email. I would reverse your order you’ve mentioned the book and the program in. You can say, “I am launching this program with Brown to support X, Y, and Z. I’d like to share more details with you if the story interests you and you’d agree to a news embargo date of A. This is a close subject to me given that I wrote a book on it, etc etc etc.”

Then, finally, your last question of a clear ask. You’re asking for a time from them. That’s ambiguous and can result in calendar ping-pong. Start by asking if they’d agree to an embargo date, then note that you’ll follow up with some times you can chat about greater details.

With that spelled out, I’d like to see you redraft what you have here and send me the new draft. Then, I’ll take another look and iron out any kinks on the tactical side of things.

With that in mind, we can redraft the original email to make it clearer to reply to, to give journalists just enough info to write a story, and to offer them something unique that puts their skin in the game. 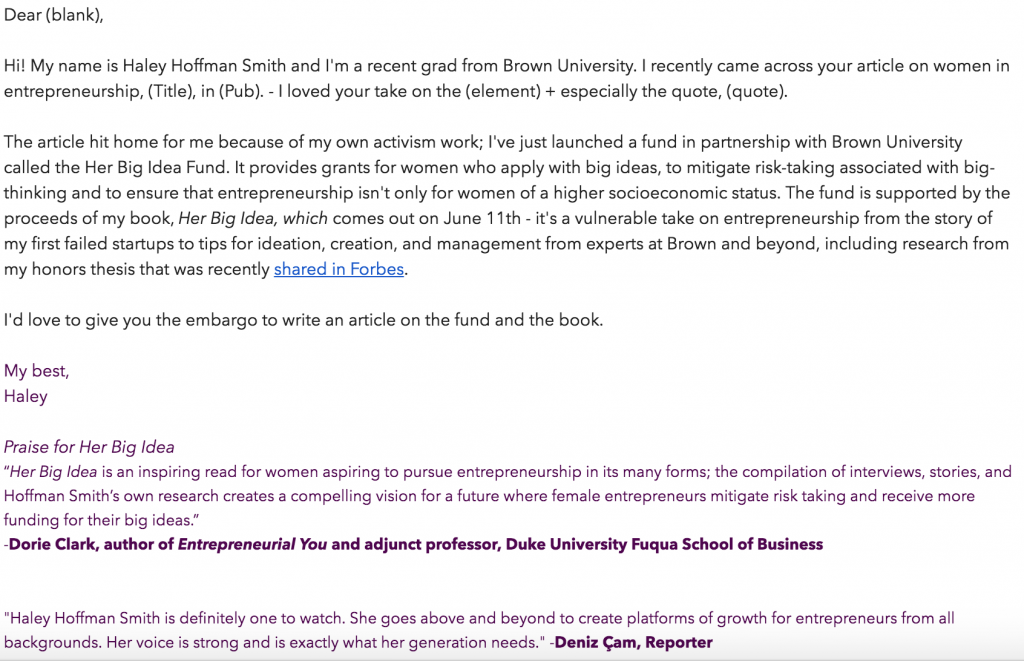 This email is much stronger with just a few tweaks. Those tweaks make it clear she’s emailing a specific person, give them something relevant to pique their interest, and offers them a unique takeaway giving them an incentive to reply.

The Call To Action is clear at the end of the message.

The only way I would tweak this message further would be to turn the CTA into a question and to pull out the link (I don’t like external links in first messages because they distract people from replying to your message). Tweaking the CTA could look like this:

I’d love to offer you an embargo to write an article on the fund and the book. Would that interest you?

You could also take a softer approach and say something like this:

This might be worth a conversation. Would that interest you?

That’s something you can A/B test. If you send 20 messages to journalists, you try 10 with the first and 10 with the second.

How to Pitch Journalists: Takeaways

When you pitch journalists, remember that you’re talking to normal people who have jobs they have to do. Help them do those jobs, be friendly, be easy to work with, and do your research beforehand.

You’re building a relationship. If you have a positive and established relationship with a journalist, they’re more likely to cover you now and in the future. Take a sincere interest in their work and help them accomplish their job of doing more of that work. Don’t shoehorn yourself into working with a journalist it doesn’t make sense to work with. If you’re launching a SaaS product that works with cloud infrastructure providers, don’t reach out to somebody who writes about urban planning.

Don’t overwhelm people. Don’t make the mistake of sending along your whole life story in your first email. The job of your first email is to confirm interest and get a reply. That’s it. Send along as much info as you need to do do that. Don’t send a press release. Don’t link away from your email to a lot of outside links.

Offer them something unique. What’s in it for them? Journalists aren’t dummies. They know that if you’re emailing them, you probably pitch journalists more than once. Offer them something relevant to their beat, their audience, and their job. If you can offer them a unique and exclusive take on the story, all the better.

Do your research. Actually know who you are talking to and why you are talking to them. Know the angle they like to take. Know why they got into writing on that angle. Reference old pieces where you can. Make it easy for them to work it into their flow.

Follow this framework when you pitch journalists and you’ll get more positive replies, more traction, and more features.

You can purchase Haley’s book here on Amazon.